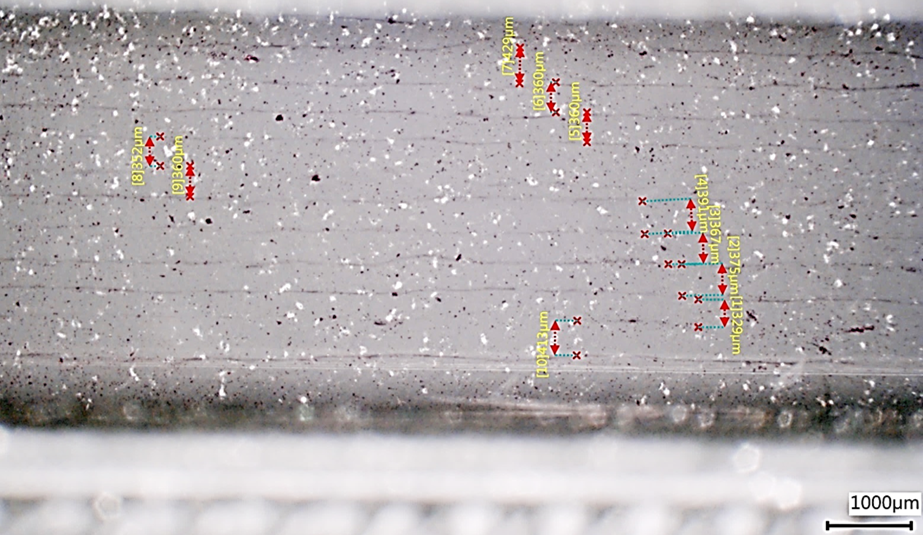 Acoustofluidic cells are used for ultrasound (US) particle manipulation in liquids. The generation of an US standing wave used for particle manipulation is shown in Figure 1. Here, a wave emitted by an US source (transducer) gets reflected when it hits the reflector. Due to interference this reflected wave superimposes with the incoming primary waves resulting in an ultrasound standing wave.

The force mainly acting on particles during US particle manipulation is called the primary radiation force Fz:

This cell has been designed to achieve both a lateral (grey) separation and an axial (red) separation, making it possible to both concentrate all particles and droplets into the focal plane of the hyperspectral imaging system and further separating oil droplets and suspended particles in this focal plane. The schematic measurement setup is shown in Figure 3 (for the prototype, the piezo is mounted under the image plane, for the sake of visibility, it is shown on the side of the cell in these figures). Here, the orange particles denote suspended solids, while the black dots denote oil droplets.

Keeping this in mind, we designed a first alpha prototype of an acoustofluidic cell with the goal of seamless integration with a hyperspectral imaging system. For these initial experiments, this cell was mounted on an xyz-stage and features temperature stabilisation to allow high US intensities. Images of the first generation acoustofluidic setup are shown in Figure 4.

Experimental setup for the demonstration of the acoustofluidic cell:

The validation of the experimental setup was performed with two setups, a simple Raspberry Pi driven routine setup and a cutting-edge Keyence Digital microscope (Osaka, Japan) for validation of theoretical performance parameters. Both systems feature a sonicamp ultrasound driver (usePAT, Vienna, Austria) and the same liquid handling setup using a peristaltic pump. The two setups are shown in Figure 5.

For the demonstration of the successful ultrasound manipulation of suspended particles, red polystyrene beads with a diameter of 10 µm were chosen as model particles. A constantly stirred particle suspension was pumped in a loop using a peristaltic pump (Ismatec SA, Opfikon, Switzerland). To enhance the contrast of the CNC machined background towards the particles, the flow cell was spray-painted with a white acrylic colour.

The impact of the US particle manipulation on the polystyrene beads at a steady flow can be seen in Figure 6. The particles are concentrated both laterally and axially, leading to a string like arrangement, which will be imaged by the hyperspectral imaging system in later steps.